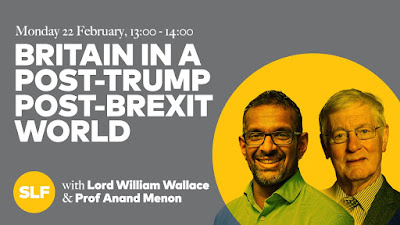 Professor Anand Menon is the Director of the UK in a Changing Europe and Professor of European Politics and Foreign Affairs at Kings College, London.

This will be a wide ranging discussion about the UK, its foreign policy and relations, the projection of its soft power.  Is Global Britain more than just a sound bite?  How should the UK promote its foreign policy objectives? What should they be? Is there room for a distinctive liberal vision?

There SLF has published a couple of important articles that are relevant to this discussion. Richard Corbett, formerly Leader of the Labour Group in the European Parliament, explains why the Brexit arrangements are far from complete. He draws attention to the fact that almost nothing is settled for services (80% of the UK economy). Looking at financial services: in the next months, the unresolved issue of access for British financial services to the EU market will come to a head.  At stake are thousands of jobs and billions of pounds of tax revenue.

Stephen Farry, the Alliance MP for North Down, has also written about Brexit and the implications of the Northern Ireland protocol. Brexit, he tells us, has destabilised an already fragile Northern Ireland. The Alliance Party did not advocate the Protocol. They opposed the Withdrawal Agreement, including the Protocol, when it was voted upon in both the House of Commons and the European Parliament. Better options existed for addressing the particular challenges posed to Northern Ireland from Brexit.

In the coming weeks the SLF has planned more online events, we very much hope you will be able to join us.