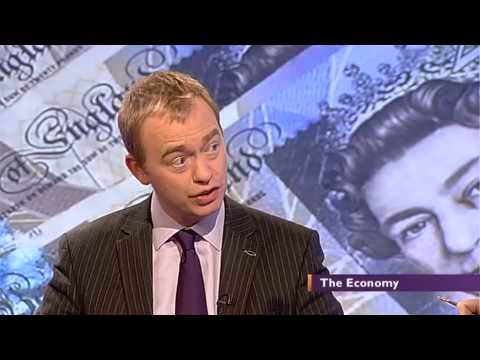 On the day Tim Farron's Beveridge lecture was a triumph. The 40 minutes speech was punctuated by warm and spontaneous applause and at the end the delegates rose to their feet without prompting to give him an extended ovation. The speech made folk feel better about themselves and their politics. It has been a rough time for those who come out of the radical tradition.  Here, at last, was someone who was speaking about their dreams and hopes.

The speech's great virtue was that it was forward looking. It was not picking over the bones of the coalition corpse. It sort to redefine Liberal attitudes for a new time. Farron's proposition was that the Thatcher/Regan/Blair free market consensus was breaking down just as the post war consensus had and that our task was to articulate a liberal basis for a new consensus.

There will be gainsayers who will pick holes in the speech and predict (that rather like an Ed Balls budget) it will unravel under close examination. I am not one. I have my reservations and even disagreements but on the day the address achieved what it was meant to and it is unfair to judge it as if it were the launch of a comprehensive manifesto.

There is a great weight of expectation on Tim's shoulders. Viewed from the perspective of most of the delegates at the Social Liberal Conference he is the preferred candidate to replace Clegg-and the sooner the better. This is a new situation. All has changed since Vince failed to pick up the pearl handled revolver that was delivered to him; in leadership terms he is a busted flush.

There was enough of substance in the speech  to give hope, but for me I couldn't quite see the connection to Beveridge. Tim is a doughty and successful election fighter. Beveridge was useless. He only won one election and that was under the war time coalition pact which meant he didn't have an opponent from the Conservatives or Labour. A local farmer stood as an independent, but it was not one of those war time by elections- like the ones headed up by Radical Action -which challenged the status quo, and Beveridge had a shoo in. When the real challenge came in 1945 he failed despite the long Liberal tradition in Berwick and his high profile.

The Beveridge who signed up with Sinclair's Liberal Party had traveled some distance from his early alliance with the Webbs. It is instructive to look at his writing from his time as a Liberal.  Most notable his undisguised anger at the way Labour botched his proposal. He loathed the term 'welfare state' and always maintained that he wanted a 'welfare society' .His biographer, Jose Harris, asserts that a key reason he embarked on his 1948 Report was 'as a protest against the Labour Government's rejection of his proposal that Friendly Societies should be employed as agents for 'humanising and personalising' national insurance. David Boyle- who was on the billing for the Social Liberal Conference- summed  up the impact of the state institutions Labour inflicted on us thus::

The trouble was that these institutions also disempowered people.  They had their own agendas, their own elites and - more recently - their own dysfunctional targets hollowing them out.  Beveridge warned that this would be the case as well, in his report Voluntary Action, and he was ignored.

Tim speech did not explore that aspect of the Beveridge legacy which would have been interesting. The Labour Party has always been soft on Monopolies and the problems they create and it is an issue of real
difference.This is particularly important at a time when the left's overall view of reform is that it should re-create state monopolies and that they should conform to central dictates, all delivering identical services.

Instead Tim issued a call to arms for active 'can-do' government focusing particularly on infrastructure investment-High Speed Trains,  superfast broad band and the building of homes.

It is of course fair to use Beveridge as an example of  someone who got things done. Given the central position that providing good affordable homes has in Tim's outlook he could have chosen Beveridge's time as Chair of the Newton Aycliffe New Town, the place he chose as a flag ship for implementing his 1942 Report. 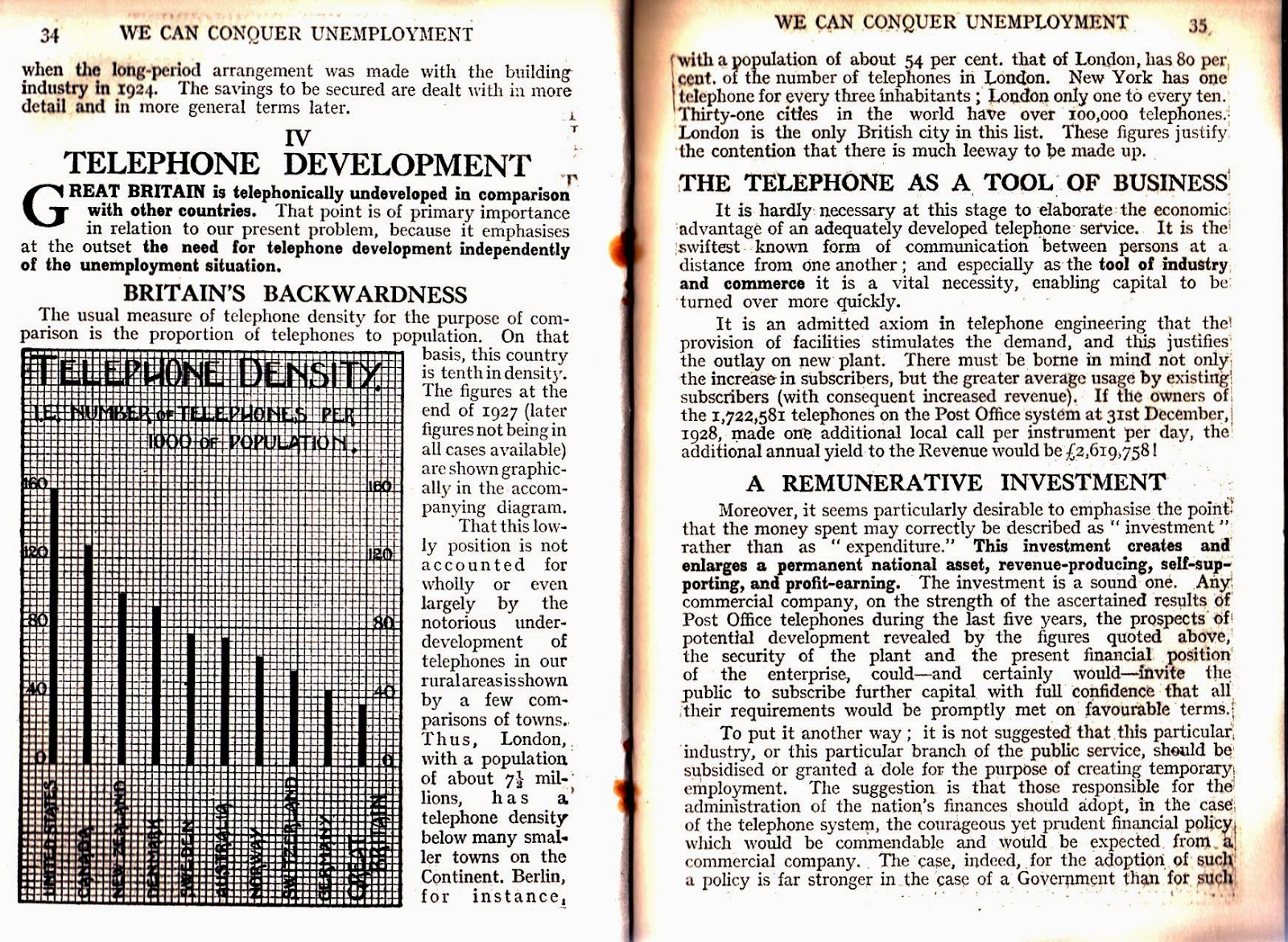 In fact it was the other great social Liberal of the mid twentieth century that the speech most brought to mind; Keynes. As Tim was listing the implications of failing to invest in broadband I kept remembering a graph I'd seen somewhere that made exactly the same point 80 odd years ago about telephones and their role as a tool for business.....And there it is on page 34 of the ground breaking 1929 manifesto: We can Conquer Unemployment. 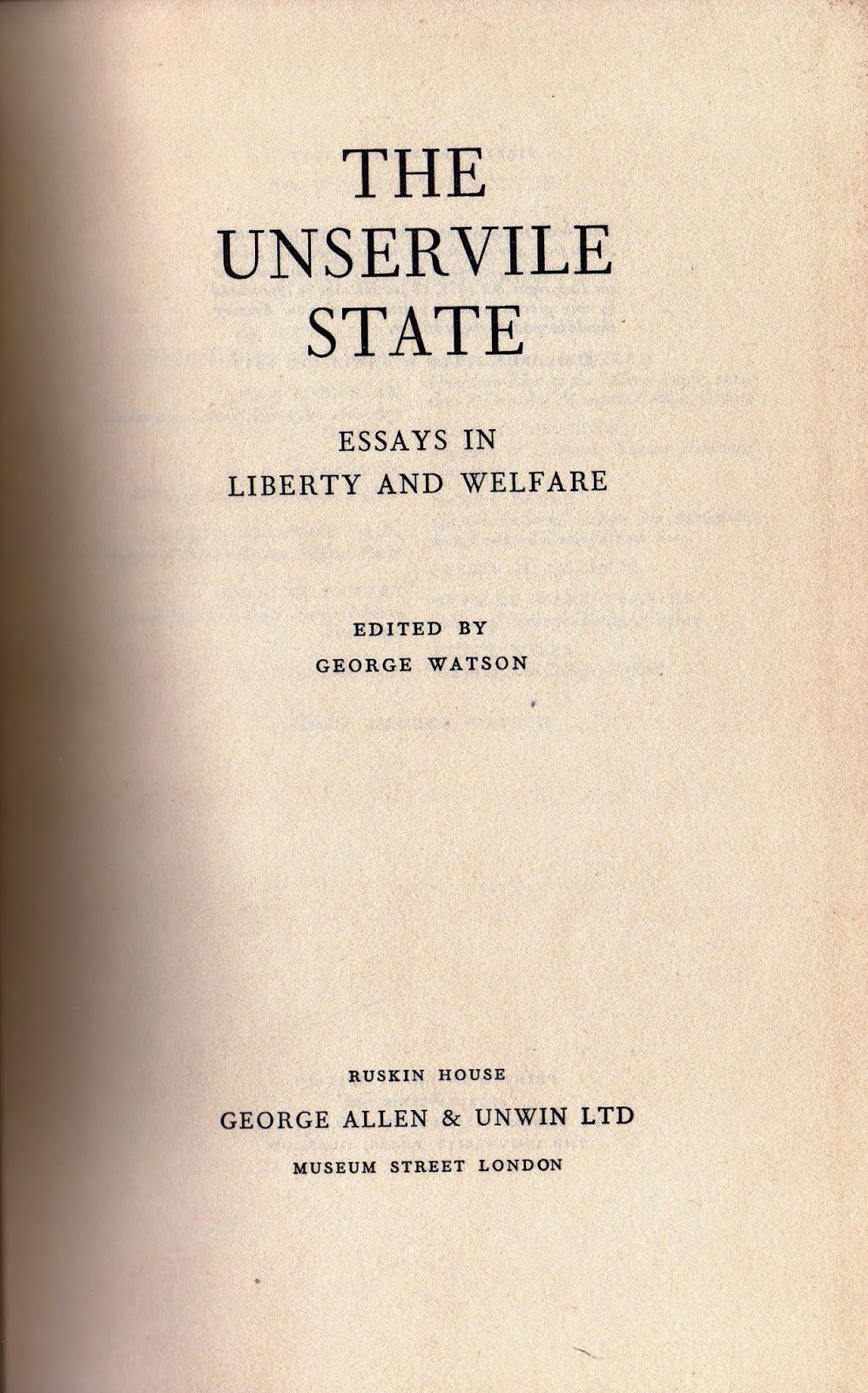 The 1929 manifesto was a slimmed down version of a much more comprehensive Report. I remember Chris Mayhew getting very frustrated at a meeting of the Standing Committee which was discussing the 1979 manifesto. These discussions were taking place at the time the Party was marking the 50th Anniversary of the Yellow Book. A re production of the book-all 503 pages of it-was launched at the NLC with Margery Corbett Ashby in attendance( She was one of the Radical Action by election candidates who did rock the War time pact polling 44% in the Bury St Edmunds by election of 1944 . Back in 1928 she had served on one of the Yellow Books Special Editorial Committees) Mayhew felt we were striving to reproduce something as comprehensive as the Yellow Book when we needed to be much more concise. I think he was right.

But there is a time for a substantial tome. The Yellow Book was one such. Its publication came at a time when the old consensus was collapsing and its outlook and policy prescriptions seemed to have failed. It foreshadowed the post war consensus built on Keynes and Beveridge. Almost 30 years later, in the first year of Grimond's leadership, the Unservile State was published, this was a conscious attempt to re define Liberalism for a new age. Grimond had gathered together leading Liberal thinkers under the Chairmanship of Elliot Dodds  and the collection of essays they published under the editorship of George Watson launched the Grimond revival.

As Tim spoke to bloggers afterwards we probed some of the missing pieces of the jig saw. How exactly were we to lift incomes? How did he differ from Vince on the issue of the living wage? How do you balance environmental protection against the need for homes? What about Northern devolution? I am destined to have died before the North gets a high speed train link from Liverpool to Hull. If the North had the strategic powers now on offer to Scots under devo max I might live to see it. What about employee ownership, diversity in education, the folly of concentrating so much power in the office of Mayor etc etc

There were some convincing answers and more readiness than his detractors would expect to stand up against the prevailing 'soft left'  Guardian view. But if Tim is to launch a new consensus now that the free market fad is fading then he needs to do what those in previous generations have done and gather round him the best radical minds and fill out the details.

We need an economically convincing programme that shows how wealth and power can be shared significantly more fairly. Caron Lindsay  reports that Vince threw out to the SLF the challenge of giving new relevance to plans for workers' ownership. I am told Vince went to Shetland to give a lecture for Alastair Carmichael on Grimond economic thinking. Someone should publish it, spreading ownership of industry and commerce is central to any new Liberal consensus. Our present voluntary plans are such that if they had been the Party's views back in the 60's Arthur Selsdon and his ilk may have stayed in the party. Reforming Company law to give workers' equal rights with shareholders was one of the things that drove him from the party to set up the Institute of Economic Idea (IEA) and into Mrs Thatchers arms.

If Tim's assertion that the Regan/Thatcher/Blair consensus is in its death throws the interests of capital should no longer be seen as supreme. Long term sustainable businesses will never be constructed if they are prey to the short term interest of capital owners.The policy solutions adopted by the party in a different era may not be be applicable in today's globalised economy. The solution is not to give up but find new ways of making it relevant.  The new consensus must rest on a Liberal view of free trade. As David Boyle observed recently:

The prevailing understanding of free trade is dominated by American conservatives. Liberal free trade, the original version, is all about tackling the tyranny of monopoly, state or private. The prevailing interpretation of free trade, as understood by the IEA for example, is far too cosy to private monopoly, and – by letting monopoly off the hook – is not really free trade at all.Liberal free trade is about enterprise, innovation and imagination. It is about the right of the small to challenge the big. It is not about giving absolute power to the wealthy and powerful. Quite the reverse.

This years SLF Conference confirmed that there are enough people with a Radical vision to inspire a new consensus. The contributions David Howarth , David Boyle, Duncan Brack and  Lousewies van der Laan. amongst others confirms that belief. Despite the travails of the last few years-and in no small part due to the SLF-the idea of social liberalism is still alive. The job of a leader is not to do everything himself or herself but to bring together a team who make our message new in this generation. S/he should not confine themselves to party members but draw on the best people who want a fair and free society. People who can say with us ( and the authors of the Yellow Book) that they 'believe with a passionate faith that the end of all political and economic action is not the perfecting or the perpetuation of this or that piece of mechanism or organisation, but that individual man and women may have life , and that they may have it more abundantly'