Norman Lamb done in acrylic and hanging in central London

and in Liberal England's  'Six of the Best' 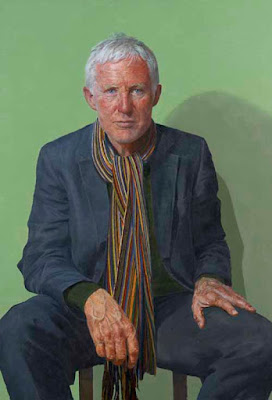 I was killing time between meeting on Monday so I popped into the National Portrait Gallery. I have to confess that one of the reasons I chose that above other central London venues was because it is one of the few places that will accept my Brompton bike into their left luggage complete with its Harris Tweed bag.

I went to see the BP Portrait Awards for 2017 Exhibition, after checking that Mary Wollstonecraft had made it safely back from her loan visit to Russia.

I have viewed the annual exhibition in previous years when I have been waiting for meetings. When I was Mayor one of the duties was to pick the pictures for the Mayor's Parlour in Southport from the collection held at The Atkinson and I chose a local Lancashire artist Peter Layzell. His self portrait was hung in the 2010 exhibition.

Back to 2017 and the time I spent waiting. The picture that caught my eye was that of the MP for North Norfolk Norman Lamb. I don't think I have seen him without his spectacles but the Norfolk artist Paul Smith obvious felt that their absence produced a better portrait. As I was looking at it a man joined me , he was wearing the identical scarf that Paul Smith the artist had put round Norman's neck. It was my companion explained created by the designer Paul Smith. Such things , when they have to be explained to you, are not as funny.
Posted by iain at Wednesday, August 30, 2017